Ah the Irony – An Blog about Vintage Typewriters

Ah the Irony – An Blog about Vintage Typewriters

Vintage typewriters seem to have become all the rage, these days. After years gathering dust amongst the bric a brac on the shelves of bad theme pubs, they’ve joined the ranks of the items of analogue technology much beloved of the hipster crowd (are they still a thing?), and a quick on line search will swiftly turn up portable versions being offered at some eye-watering prices.

I’m pleased to say this is one area where I can genuinely claim to have had a bit of a typewriter addiction since childhood. From his days editing the Scout newsletter in Osterley, Dad had a venerable 1940s Corona model that he indulgently allowed my sister and I to dig out and experiment with. Fortunately, this piece of machinery was sufficiently robust to withstand our youthful attention, and the inevitable crossed keys always fell back into place without damage. In turn, it was pressed into worthwhile use for everything from homework to lists of record purchases (like all midcentury rebels, I had a passion for a good list!). And so the intricacies of line spacing, margins and tabs started to gain a relevance, and the various knobs and levers scattered around the extremities of the keyboard, body and carriage revealed their intended purposes.

A real catalyst was the opportunity to learn typing at school. I should add that this was not some mission by my very traditional all-boys school to add a bit of gender inclusivity – more an attempt to add another option to the Wednesday afternoon ‘hobbies’ session that involved nothing more than an empty classroom, a stack of Pitmans touch typing books and some decrepit machines rescued from the school offices. Remember, the mid 70s were a time when typing the province of typists, authors and journalists, and very few others – none of which were regarded as a suitable career choice for aspiring home counties youth. But I was hooked. Here was a chance to properly master a fascinating piece of complex machinery, and create something pleasing to the eye at the same time. Art was never my strongpoint, but there was something about a well laid out typed sheet that played to my emerging vintage aesthetic eye.

Thankfully, fingers that had never taken to piano keyboard proved far more attuned to the QWERTY scale and before long I was managing to type ‘properly’ – right fingers for the right keys and – wonder of wonders – without looking down. It’s an amazing manifestation of the synapses of the brain that the concentration needed to make legible handwriting shapes isn’t needed to make the fingers work, so the mind can be leaping ahead to the second half of a sentence while the fingers are still typing the first. My new found skill was celebrated in what’s got to be one of the more unusual 17th birthday presents any young chap has asked for – a brand new Olivetti, light enough to move around and store in the house but solid enough to turn out professional standard typing on my home designed headed paper (courtesy of some closet photocopying on the new machine – a technological novelty – in the office where I’d started work).

Since then, I’ve not always had a typewriter, but I’ve never been without access to one. I can’t remember when or to where the Olivetti went – a great shame either way as it was a really useful machine. For a while I also acquired a professional Adler model, rescued from the basement of the building my office had recently vacated and lugged home with great effort on the train. Beautiful item, but far too big and heavy to be kept around the house! I can’t remember where that went either. I guess, like most others, I was seduced for a while by the new technologies constantly appearing and accessible in the environments where I worked: electric machines with golf ball heads; versions with a small memory capability that allowed you to review a sentence before committing it; and then, of course, the arrival of the word processor, at first standalone and then as part of the by now ubiquitous desktop computer, with its siren song profusion of typefaces, font sizes and associated desktop publishing paraphenalia that turned us all into amateur compositors.

And now they’re making a comeback, and despite some of the silly prices being demanded on line and in the more chic ‘vintage’ outlets, nice models at reasonable prices aren’t too hard to find. Most are of the portable variety, understandably. The bigger office machines, like my Adler, would rarely have been found in a domestic environment and so, when replaced, would doubtless have ended up in the nearest skip, however serviceable they might still have been. The portables are much more practical, though, having been designed not to spend their lives permanently installed on a desk and often coming in some attractive and inventive covers/cases. My current collection started with an Antares P59 in a rather nice metallic green (since commandeered by my daughter who’s caught the typing bug in the course of her art studies); that was quickly followed by an Olivetti Lettera 22 in a fairly common light blue but with a fetching two-tone zip up case and fitted (I found after the event, not as a deal-breaker!) with a lovely green and red ribbon. I thought I could leave it at that until I found an Imperial Good Companion 4 (who knows what happened to the first three…) in a fantastic metal case sculptured like the hood of a 50s car – and then there was the Tippa which I didn’t really mean to buy, but was in our favourite charity shop so I felt I sort of had to. 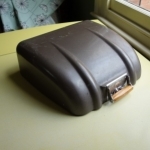 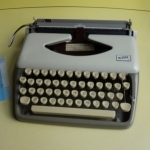 The nice thing about old typewriters is that, unlike a lot of old technology, there’s not a lot you need to know before buying one. Any decent vendor will have it on display with a sheet of paper so you can check the mechanism actually works. The original accessories are always nice to have if they’ve survived – including not just the case but also dust covers and instruction book (though fortunately typewriter controls are pretty common to all models). Sometimes, you’ll find sheets of carbon paper, typing erasers (usually long perished) and Tippex correction slips tucked away from the last time the machine was used. Unsurprisingly, ribbons are often on their last legs. Although thankfully new ribbons can still be sourced on line, I’ve found that the variety of spool sizes available doesn’t cater for all the models I’ve got, but ribbon widths are pretty standard and, with care, a new ribbon can be wound onto the original spools without transferring too much of the ink onto my clumsy fingers!

So, the next time your cursor hovers over the Courier New typeface on your laptop for that vintage look to your document, why not have the courage of your convictions, hunt yourself down an original machine and put it to use. You’ll curse yourself as your ‘hunt and peck’ style locks up the keys, despair as you realize that it needs a consistent key pressure to produce a consistent type, and glare in frustration as you’re reminded that the backspace key does, as the name implies, just move the carriage back a space and not magically remove your mistyped character from the page but, with a bit of practice, you’ll be amazed that the clacking noise redolent of a hundred black and white ‘hold the front page’ movies is actually you!

And the old Corona? That now resides in the Czech Republic, handed on to the next generation of the family to whet their appetite…