Do you ever have that collector’s dream? You know, the one where you suddenly stumble upon a massive collection of one of the things you love at an affordable price, and you’re torn between the sheer excitement of exploring the haul and a slight panic that you can’t carry it all away. For me, it usually features a forgotten stock room in an old model shop and shelves full of old Airfix kits, but just recently the dream came to life unexpectedly in the form of a huge stash of books about rock’n’roll.

Quite often, when I can escape from our London office for a bit of fresh air at a lunchtime, I’ll take a stroll up to Cambridge Circus, and pop my head either into Fopp to look at records and DVDs, or into one of the surviving secondhand bookshops along the Charing Cross Road. On this occasion, there was nothing much new in Fopp, so as I passed Quinto and Francis Edwards’ bookshop, I had ten minutes to spare to see if the stock of secondhand books in the basement had been refreshed lately. As I reached the stairs, my eye was caught by a little display of books about Buddy Holly and Gene Vincent – all large format and obviously short run, they were quite pricey so I assumed they’d come in as an end of run lot. Downstairs, a glance around revealed the usual good selection of history, but I thought I’d check out the culture section before getting stuck into it. Interesting – there was a shelf on the end wall with a few volumes about music in the 50s, but mainly biographies of fairly mainstream artists; ah, but there’s another shelf above it and, look, there’s a book about rockabilly – and another one – and one about rock’n’roll between 1950 and 1953, and one about Doo Wop groups. Hang on a minute, these aren’t just your usual coffee table books – these are pretty specialised. Better get some of these. 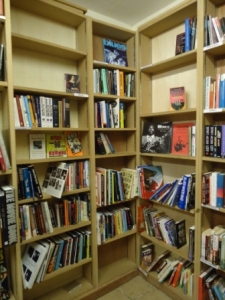 One man’s collection of rock’n’roll reading – after I’d had a good go at it!

And that’s when I glanced to my left and realised that the entire bookcase next to it was equally full of books about 1950s music. Bloody hell – so’s the one next to it! There are biographies, genre studies, books on record labels and producers, record collectors’ listings, home produced studies, there are even books about collecting books on rock’n’roll. And they’re all secondhand, and all priced affordably. That’s when the panic started to set in. How am I going to get through this lot, and still get back to work? And how am I going to carry all the ones I want to buy? As I started to build the stack of possibles, it became pretty clear that this was one man’s personal collection, built up over many years, and stretching up until quite recently given that at least one of them had been published within the past 18 months. The only clues I could find were in some personal inscriptions to ‘David’ (including one from Myron Lee – that one went in the pile). Very quickly, I was discarding volumes that, if I’d come across them in isolation I’d have picked up like a shot, trying to apply some kind of selectivity – not least as we’d have to find somewhere to store them, and three empty ceiling high bookcases we just don’t have at MidCentury Villas. 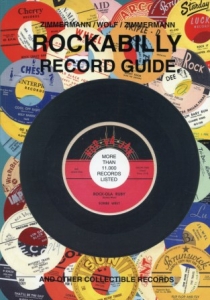 Eventually, I managed to whittle the pile down to something I could just about tote back to the office and stash away until I could take them home in instalments. Sadly, the team on the cash desk couldn’t shed any more light on the source; they didn’t think they’d come from anyone’s estate, although it was hard to think what might cause someone to suddenly decide to rid themselves of a lifetime’s collection that they’d been adding to until quite recently unless something drastic had occurred. Back in the office, I was quickly texting a few pals to tip them off, and later in the evening found myself comparing notes with one who’d just left the premises with a couple of bags of goodies to add to his already impressive collection of rock’n’roll reference material. I was back there myself the following day to see what I might have missed and came away with another armful that my eye had skipped over the first time. 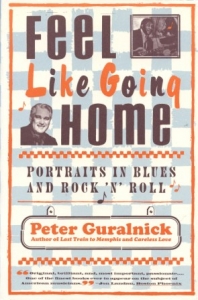 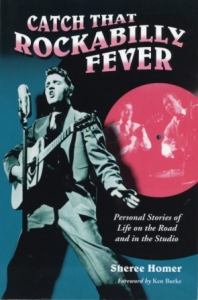 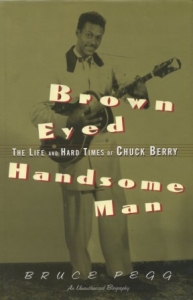 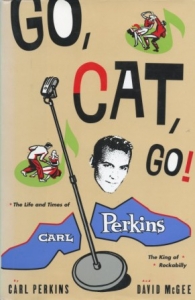 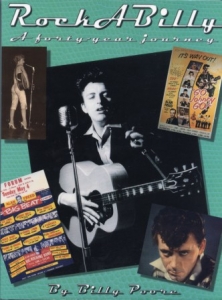 And now the pleasure of reading them. Whoever you are, David, and whatever crisis forced you to part with such a fantastic collection, you can be sure that at least part of it is being cherished afresh. For those of you within reach of the Charing Cross Road, there’s still a good stack of goodies to browse through (check the website for details of location and opening times). And for the rest of you, remember that dreams – even weird collectors’ dreams – can occasionally come true.

An update as of 3 May – the Charing Cross Road branch have refreshed their stock but all is not lost! The rest of the rocking music collection has gone back to the main branch at The Old Cinema, Cottage Street, Hay on Wye, Herefordshire, HR3 5DF. Check this link for details.