Stone Me, Sid, They’re Knocking Down The Hand and Racquet!

Stone Me, Sid, They’re Knocking Down The Hand and Racquet! 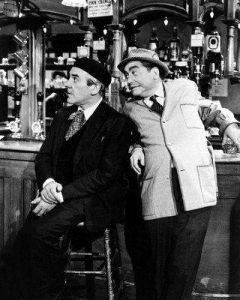 Hancock’s Half Hour has been a part of my life for as long as I can remember. By the time I was 13, I was sneaking my little transistor radio down to our holiday hotel dining room to listen in to the summer re-runs on Radio 4 (egged on by my Dad), so I was certainly an addict at an early age. It’s one of the many passions that I proudly acquired from Dad, whose enthusiasm for many classic, and slightly obscure, films, TV programmes and radio shows worked their way into my DNA almost as soon as I could comprehend the words. The Hancock thing was fuelled by a reel-to-reel tape he’d made from the radio containing two classic Half Hour episodes: The Insurance Policy and The Poetry Society which, before the days of video or cassette tapes, let alone You Tube and iPlayer, we’d replay endlessly. It’s no surprise, then, that Hancock’s East Cheam local pub, the Hand and Racquet, was seared into my consciousness in scenes such as the one where Hancock is busy refusing to pay bills on the basis of substandard service, when his secretary (played by Hattie Jacques) opens the next letter in the pile: “It’s from the landlord of The Hand and Racquet. He’s refusing to pay you until your act improves”. “Stone me,” replies Hancock, “Hoist by me own petard”. 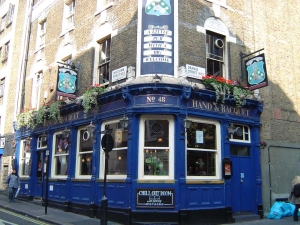 The pub in happier times

It was an old copy of the newsletter of the Tony Hancock Appreciation Society that tipped me off that The Hand and Racquet wasn’t just a fictional pub in Hancock’s world of East Cheam (itself a fiction – there’s a Cheam, of course, in Surrey, and I’ve driven through it many times going East-West or back again, but Hancock’s seedy suburb is just a fiction), but a real hostelry in central London in Whitcomb Street, just off Leicester Square. First, the history bit – the pub was built in Victorian times and first opened in 1865, taking its name from the the tennis court and the national headquarters of the game which was located across the street until 1866. Quite apart from its location close to the heart of London’s Theatreland, it was conveniently both off the beaten track and just a few minutes’ walk from the Paris Theatre, Lower Regent Street, where many of the classic BBC radio comedies were recorded. As a result, and as a plaque on the outside of the building recorded, the upstairs became a Mecca for comedy. Artists such as Tony Hancock, Sid James and Tommy Cooper were often seen quaffing ale or two. Tommy Cooper, when the bar was split into two bars, would use his height to peer through the windows to see if anyone he knew was in the bar, as he always tried to avoid buying other people drinks. The problem was everyone would see the fez and follow him in.

The pub was equally well-known amongst with writers, including Hancock’s famous writing duo, Ray Galton and Alan Simpson who were struck by the name of the pub and decided to appropriate it for Hancock’s local. As Alan Simpson told the Independent on Sunday in a more recent interview: “We heard about it as Tony used to drink in there and thought it such a fantastic name that we chose The Hand & Racquet as his local in the Hancock Half Hour shows. Nowadays pubs are all called things like the Slug & Lettuce. It’s getting ridiculous”.

Now just a hole in the ground

Sadly, The Hand and Racquet is no more. Having closed a number of years back as trade drifted away from traditional pubs, and after a determined but unsuccessful campaign by the Victorian Society, the whole block between Whitcomb Street and Leicester Square, including not only the pub but also the art deco cinema fronting the Square itself, has fallen victim to redevelopment to create a ‘high quality urban resort hotel’ (oh, goody, another temple of tourist bling – just what London needs).

Having drunk at the pub from time to time to sup in the same hallowed bars as my heroes, I’ve been watching the building’s slow decline while it awaited its fate, in the hope that I might rescue some bit of memorabilia – my holy grail was one of the light fittings in the shape of a hand holding a tennis racquet. For a long time, it was left alone although pretty insecure, until steel shutters went up a couple of years ago. Then in Spring this year the whole block was shrouded in scaffolding and it was clear its time was up. With more cheek than actual hope, I asked one of the workmen if it would be possible to retrieve something with the pub’s name on it, and I was slightly taken aback to be escorted right into the site to meet the Site Manager, a bloke called Liam Hennessey. I explained my quest and was delighted when he agreed to take a look inside and see what he could find. I was even more delighted to get a call from him later the same day to report that, although squatters who’d gained access soon after the pub’s closure had stripped out many of the fittings (including, sadly, the lights), he’d email me photos to see if there was anything worth saving. Equally sadly, the pub’s hanging sign, which had survived right up until the arrival of the contractors, had been removed and destroyed when the scaffolding went up, so all that remained were the name boards from the side of the building. By now desperate to save something for posterity, I eagerly accepted the offer and settled down to wait until work reached that part of the site. 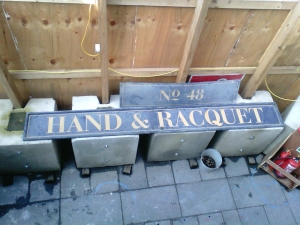 Rescued in the yard

Months passed, work was delayed owing the inevitable asbestos finds, and Liam moved on. Hearing nothing, I feared that my request had been lost in handovers, but when I spotted that work had finally reached the pub itself, I talked my way back into the site office. I’m pretty sure the new Site Manager and his team were testing me out to check I wasn’t just some chancer after a quick EBay buck. We went from knowing nothing about the signs, to their having been destroyed, to their being sold to someone else – I think my genuine, if disappointed, reaction that I was glad that they were at least somewhere safe sealed the deal and the truth was revealed – they were safely stashed away, waiting for me. At over 20-feet long, one was just too big to find a home for, let alone move without a suitable vehicle, but the other, at a mere 11 feet, looked transportable and, to put the icing on the cake, was accompanied by the street number sign from the corner of the building.

Now – where to deposit them? I’d been loath to make any promises to any organisation until I knew they were safe, but now time was pressing. Fortunately, my first and ideal home came up trumps – the new Museum of Comedy under St George’s Church in Bloomsbury, where there are displays relating to both Hancock and Tommy Cooper. Some quick emailing and phone calling, followed by a lunchtime route check, sealed the deal and after work on Thursday 15 October, a couple of unsuspecting office colleagues were inveigled into helping me make the delivery. Toting an 11-foot board through the West End evening crowds made for a few comedy moments in itself, but we arrived safely at the Museum in time to see the signs safely into their new home and retire to another local Victorian boozer for a couple of celebratory pints. 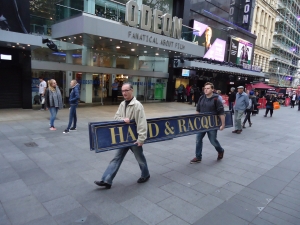 Not the usual Thursday evening sight in Leicester Square… 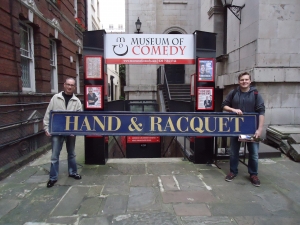 So, a quest is done – in honour of those whose work I’ve admired so much, and of the father who introduced me to so much wonderful British humour. I’m hugely grateful to the team from McGee Group Limited who in the middle of a massive, complicated and high profile development, found time to indulge the eccentric who wandered into their site, waffling on about long-dead comedians. Hopefully, it won’t be long before the signs find their way onto the Museum walls and we can raise a toast to those who once drank beneath them. 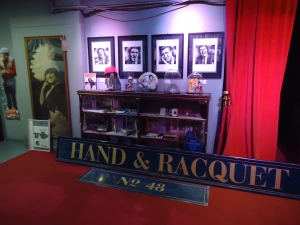 Reunited with Messrs Hancock and Cooper

A Swarm of Vintage Ladybirds in Downtown Gloucester City